The Glasgow Necropolis is a sprawling cemetery perched high on a hill overlooking the city and dating back to 1832. It is a gorgeous site, being adorned with some 3500 monuments paying tribute to more than 50,000 interments. However, its beauty is easily overshadowed by its notorious reputation as being one of the most haunted places in all of Scotland. Legends of ghosts and vampires that roam the 37 acres which make up this spooky cemetery exist and are commonly told by locals.

Perhaps the creepiest story that is associated with the Glasgow Necropolis involves a vampire. This beast is commonly referred to as the Gorbals Vampire and has been described as being 7 feet tall, monstrous and containing a mouth full of razor sharp, iron teeth. After two young local children were supposedly murdered by the Gorbals Vampire, this story reached its climax. It is said that following this event, one night in 1954, hundreds of school-aged children descended upon the Glasgow Necropolis. They came armed with weapons and ready to fight and kill the Gorbals Vampire they believed dwelled within Glasgow’s most famed cemetery.

After police heard of what was happening, they broke up the gang and sent the brave children home. Soon, horror comic books that had arrived in Scotland from the US were banned from being sold to minors. This was in the hopes of quelling the children’s over-active imaginations, thought to of given rise to this spooky Scotish urban legend of the Gorbals Vampire.

Apart from vampires, many people also believe that ghosts roam the haunted Glasgow Necropolis. Though their identities are unknown, some have been sighted incredibly frequently. One of the most reported apparitions to roam the cemetery is that of a woman in white. She is often seen gliding through the tombstones in the early hours of the morning. In addition, many have claimed to witness statues adorning the tops of graves move their facial features as though they were living beings. Many more have heard the distinct sounds of whispering when no one is around and picked up on disembodied voices all throughout the sprawling graveyard.

The Glasgow Necropolis is a beautiful and fascinating place full of Scotish history. It is open daily and free to enter. I highly recommend a visit if you are ever in the Glasgow area.

If you are looking to check out other haunted places in Glasgow, try the nearby Cathedral House Hotel, which is right across the street from the Glasgow Necropolis. 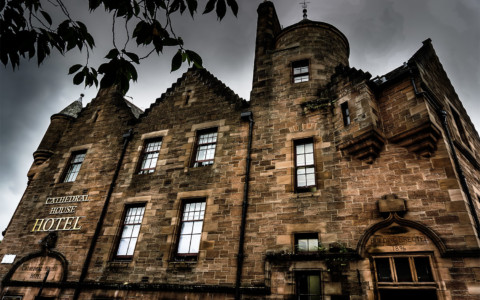