Hollywood is a place filled with glitz, glam and well known throughout the world for being the home of film. One of the area’s most iconic and recognizable landmarks is the Hollywood Sign, which originally read “Hollywood Land” and was erected as part of a real estate development marketing campaign.

For many years, people have claimed that the Hollywood sign is actually haunted. This seems to fit in with the dark and at times seedy-side that Hollywood has also become known for.

The Ghost of Peg Entwistle and the Hollywood Sign

It was during September of 1932 that the Hollywood Sign would enter paranormal infamy. One night, Peg Entwistle, a young, aspiring actress, made her way out to the sign. She then ascended the letter ‘H’ via a maintenance ladder and proceeded to jump, ending her own life.

The following morning, Sunday the 18th, a hiker was to discover a few articles of Peg’s clothing, her purse and a solemn and heartbreaking suicide note reading:

“I am afraid, I am a coward. I am sorry for everything. If I had done this a long time ago, it would have saved a lot of pain. P.E.”

It has been speculated that Peg was facing a battle with depression, likely spurred on by difficulty breaking into the tough industry of film. To this day, many people claim that Peg still remains in the vicinity of the sign and countless visitors to make the trek up the hilltop, to sight the iconic white letters, have claimed to see a ghostly woman dressed in 1930s style attire. Rather tragically, others have even claimed to see this same woman atop the letter ‘H’ and sometimes even sight her leaping from its heights.

It remains to be told whether Peg Entwistle’s ghost is a result of trapped energy, replaying this event in a residual fashion, or if Peg chooses to remain in an intelligent sense.

The haunted Hollywood sign is a sight not to be missed whilst in LA, in fact it is quite difficult to miss with many vantage points located around the city. One easily accessible area that makes for great photographs with the sign is Lake Hollywood Park, which can be accessed by car. For others wanting to get a closer look, there are various hikes which take you to the top of the hill and the closest points to the sign, which can be legally accessed. These hikes will take one through Griffith Park and depart from various points. It should be noted that the one cannot approach the actual sign too closely as security cameras and fences surround its immediate perimeter.

If you would like to learn about other haunted places in the LA area and more specifically Griffith park, I highly recommended checking out the abandoned, Old LA Zoo and the haunted Picnic Table 29. 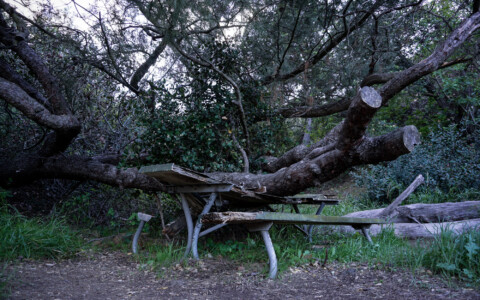