In a bustling area of Delhi, India sits a sinister piece of the city’s bloody history. The Khooni Darwaza remains perched in its original position, though it now exists in the middle of two busy freeways, built into the medium strip that separates them. The structure, which translates to Gate of Blood, has stood here since the 1500s and remains as one of just 13 other surviving gates in Delhi.

The Khooni Darwaza was not always named with such a dark title. It has quite a gory history that led to it being renamed to the more suitably bloody title of Khooni Darwaza. It is said to have seen many political executions in the past. A tremendous amount of individuals are said to have been beheaded at the gate, where it was common for their bodies to be left to rot and the severed heads to be exhibited in a grotesque display of dominance. One of the best-known executions to take place at Khooni Darwaza was that of three princes. It is said that each of these men were shot at point-blank range, which in turn is said to have triggered a great massacre in this area of Delhi. This is rumored to have resulted in thousands of further deaths. The history behind this massacre is often debated, with some claiming it may never have happened. Regardless, the legends of death surrounding Khooni Darwaza are strong and often associated with the supernatural.

Ghosts of the Khooni Darwaza

Having a history that has been closely linked to death has left the Khooni Darwaza with quite a scary reputation. Many consider the ancient gate to be one of the most haunted places In Delhi. Perhaps one of the more disturbing legends relates to a visual phenomenon that many have experienced when passing by the gate. It is not uncommon for bloodstains, that seem to be fresh, to appear upon Khooni Darwaza. It is unclear as to why these bloodstains would present themselves and disappear just as quickly as they appeared. Some speculate these stains could belong to the past and appear in a residual fashion upon the gates aging stonework.

Plenty more ghostly activity is frequently reported at the Khooni Darwaza. Interestingly, this activity is typically said to flare up and target those who appear foreign to India. Many foreigners who have visited the gate have been subjected to rather nasty paranormal attacks. These include being slapped, bitten and scratched by unseen forces. The theory as to why this happens dates back to the times of political executions at the gate. Supposedly, these executions were largely carried out by a British soldier on Indian people. Today, the ghostly attacks are thought to be a retaliation against anyone who appears similar to the person who executed so many all those years ago.

The Khooni Darwaza is a spectacular place to visit. Unfortunately, the gate’s interior has been closed off for safety reasons, though the gate can still be admired from the outside. Take care when crossing the busy road to reach this location, which sits in a medium strip separating two busy roads.

If you enjoyed reading this article you may also like to learn about the many other haunted places in Delhi, India. 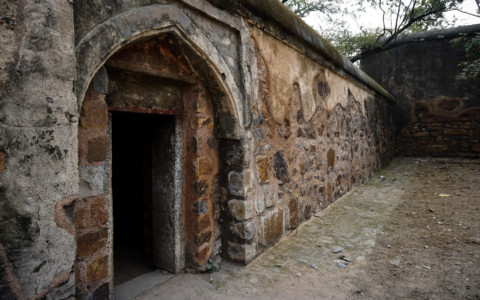