Wolfsegg is a small, remote village in Germany, positioned a peaceful distance from any major city. The main attraction and the crowning jewel of this small community towers proudly over the village, from a hill located in its direct center. Here, stands Wolfsegg Castle, a great stone edifice known for its domineering beauty as much as for its ghost stories.

Wolfsegg Castle dates back to the 13th century. Having stood in town for so long it has become a major part of the village’s landscape and influenced its surrounding community greatly. It was built by a wealthy man known as Ulrich Von Laaber to act as a strategic stronghold for the area. Though the castle never had to act as a defensive structure, it was important to provide peace of mind for its community. Wolfsegg Castle mostly acted as lodging for traveling troops. It was later abandoned and left to the community who used it as a shelter for families in need, though leaving it in desperate need of rejuvenation. Finally, the castle was largely restored by a wealthy and eccentric man. These restoration efforts continue today and are performed largely by a team of volunteers.

The most famous ghost story of Wolfsegg Castle relates to the wife of the man who had it made, Klara Von Helfenstein.

Legend tells of trouble within the couple’s marriage, caused by Ulrich’s military responsibilities that caused him to constantly travel. In his absence, Klara would become bored and lonely at the castle and looked to others to fulfill her needs. Eventually, Klara engaged in an affair, which was later discovered by Ulrich. Legend states that Ulrich had her killed one night in her chamber by local men after discovering her adultery. Ever since her murder, tales of a white woman roaming the halls of the castle, especially within Klara’s bedroom, circulated. Many believe that this is Klara’s spirit and she is also thought responsible for poltergeist activity, causing disturbances in electromagnetic fields, producing strange light anomalies and full-bodied apparition sightings.

Though this legend makes for a rather compelling ghost story. History tells that Klara actually outlived her husband and wasn’t victim to murder at his hands. Whatever the truth may be about her death, many continue to believe that it is her spirit remaining at the castle and the name behind Wolfsegg Castle’s Lady in White.

The Notorious Hole of Wolfsegg

Another supernatural tale that is often told about Wolfsegg Castle’s surroundings is referred to simply as ‘The Hole.’

This hole is said to exist not too far from the castle within part of the forest that surrounds it. It is described as being a deep crevice that was once explored and found to contain large amounts of bones within many of its chambers. Legend states that many people, including Ulrich and his sons, went missing under mysterious circumstances within the forest. Never to be seen again. Some have speculated that a monster lives within the hole and may be linked to these disappearances. This theory is backed up by claims that strange noises, as if from a beast, emanate from the forest and the area around the hole.

There is limited information available about the whereabouts of this hole online and locally. I was also unable to locate it during explorations of the forest. It is a possibility that this local lore was created to scare people out of exploring the forest.

Wolfsegg is a charming little town in Germany. Burg Wolfsegg is its centerpiece and should be visited if passing through the area. Though the castle is magnificent it is only open seasonally and checking opening hours ahead of time is highly advised. Wolfsegg can be reached by connecting major cities by local bus routes or driven to easily.

If you enjoyed this article and want to read about other spooky places in Germany, I recommend this abandoned children’s hospital in Berlin. 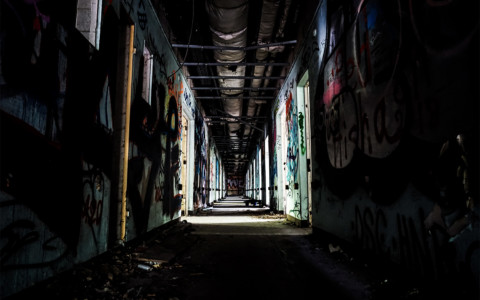