Alley of the Kiss

Guanajuato is a charming, colorful city filled with winding alleys, cutting through crowded dwellings. There is a certain attractiveness to the city that makes it one of the most romantic destinations in Mexico. This seems fitting given the city’s most famous ghost story.

Deep in the labyrinth of narrow alleyways that make up the heart of Guanajuato is a place that became the setting for a tragic love story, many have compared to Romeo and Juliet. The Alley of the Kiss does not stand out amongst the other narrow walkways shaded by towering buildings that enclose their paths. Its pleasant aesthetic does not even fit the mold of a typical haunted destination, yet the alley has gained notoriety that most locals and many visitors to the city know of.

The ghost story is so widely told that it has even influenced the name of this alley and a tradition that has kept this story alive throughout generations.

Haunting of Alley of the Kiss

The Alley of the Kiss got its name due to a tragic story that involved a forbidden love. It is told that a wealthy family took up residence within a home along the picturesque alleyway. Soon after moving to this part of town the family’s young daughter was to fall madly in love with a man who was, unfortunately, not of high social status.

Since their relationship would not have been approved of, the young couple made the decision to meet in secrecy. After sneaking out together multiple times, the young man decided he would rent an apartment that was directly across from his lover’s family home. Conveniently, the daughter’s bedroom balcony met with the balcony of her lover’s apartment. Being that the alley was so narrow, leaving little room between neighboring buildings, this allowed them to meet each night and share kisses directly over the top of the notorious alleyway.

Soon after their romance developed the father of this family began to hear rumors floating around town of his daughter’s secret activity. Infuriated, yet wanting to confirm the rumors weren’t just gossip, the father decided to spy on his daughter. One night he waited for darkness to fall only to sight his daughter engaging her lover across the small gap that allowed their balconies to meet.

Although a number of different variations exist to the conclusion of this story, they each result in death. Legend has it that the father was so furious with his daughter that he ran out to the balcony and proceeded to beat her until her body was devoid of life. After this, her lover was either pulled to his death by the father from the balcony or jumped himself, in a grief-stricken state. Falling to die on the stone stairway of the alley below.

The brutality of this story does dissipate after this young couple’s deaths. It is told that they now remain together in the afterlife, supposedly haunting the Alley of the Kiss. In a romantic twist, legend states that any couple to share a kiss upon the stairs of this particular alley will spend a lifetime of happiness together.

Visiting the Alley of the Kiss in Guanajuato, Mexico

The Alley of the Kiss is accessible to visitors at any time of the day or night. It is a busy destination in Guanajuato and may take a fair amount of time to snap a tourist-less photograph. A small shop and museum in the area exist too.

If you enjoyed this article and wish to learn about other haunted locations in Guanajuato, I suggest the Museum of the Mummies. 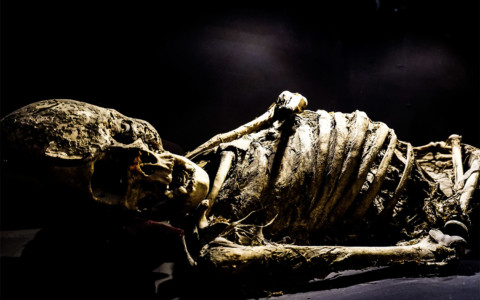 The Haunting and Horrifying Mummies of Guanajuato, Mexico

I'm sad to say that an onslaught of recent negativ

Below deck of the world’s oldest surviving Clipp

This was a first for Amy’s Crypt. Ghost hunting