Bloody Mary is one of the most prevalent and scary urban legends to circulate in Western culture. Being able to summon her into any mirror means that many have attempted to interact with Mary, some even claim to have been successful in doing so with terrifying results. Those who manage to summon Bloody Mary will be greeted with a nasty, blood-covered spirit that could potentially scream at them through the mirror or worse, attack them. Some say that Bloody Mary has the power to kill and injure those who dare disturb her, with scratching out her victim’s eyes being a common theme. So, is there any truth behind this legend and just who is Bloody Mary?

Who is Bloody Mary

Although Bloody Mary is well known in pop-culture, she remains in a way elusive. Many have pondered who the inspiration for this mirror dwelling dark spirit may be. With a number of theories about Bloody Mary’s identity existing.

The obvious choice is that the spirit of Bloody Mary is related to Mary Tudor or Mary I of England. This Mary gained infamy during her short but ruthless rule of England in the mid-1500s. During this time she even acquired the nickname Bloody Mary for burning hundreds of people at the stake in her religious motivated murderous decisions. Other than sharing the name of Bloody Mary, there is not much else tying Elizabeth Tudor to the Bloody Mary legend.

Another historical figure who has accumulated ties to Bloody Mary is that of Elizabeth Bathory, more famously known as the Blood Countess. Elizabeth is represented in the pages of history as a maniacal and murders noblewoman who killed hundreds of young, virgin women from her surrounding village. She would supposedly kill in order to drink and bathe in the blood of her victims, thus retaining her own youth. Although these crimes are likely sensationalized and not true accounts of what transpired during her life in the 15 and 1600s, she does remain known as one of the most sadistic and prolific serial killers of all time. It seems the most likely ties to Elizabeth and Bloody Mary are those forged in blood, in fact, this seems to be the only tie they share.

Finally, many people consider a woman by the name of Mary Worth to be Bloody Mary. Mary Worth’s past and history is blurred by the many versions detailing who she was, where she existed and what actions led to her infamy. These stories all seem to suggest that Mary Worth was a witch and was suspected of kidnapping young women from the village that she lived near. Though her origins are vague, many suspect that Bloody Mary could be a witch.

The rules of how to play Bloody Mary are simple and easy to complete. It should be noted that there are many variations to these rules present and they have likely been twisted over time to fit into different communities and areas. Below are the most widely reported steps.

1. Find a room that can be darkened and which contains a mirror.

2. Enter the room, closing the door behind you. Proceed to light no more than a few candles as the ritual works best in low light.

3. Stare at the reflection of your own eyes in the mirror and do not break contact with them. Then repeat “Bloody Mary” out loud, without interruption, three times in a row.

4. Now the summoning ritual is complete. Many reports of different phenomena occurring after this exist. It is widely believed that completing these steps will summon Bloody Mary into your mirror. She may appear covered in blood behind you and has been said to attack some people, either scratching out their eyes, their faces or necks.

Anyone playing paranormal games should always take caution. Whether you believe the legends of Bloody Mary or not, you never know when you might receive a response from the spirit world when calling on it! Always be prepared for an answer.

If you enjoyed this article, you might also find interest in the Hosting Game and the Closet Game. 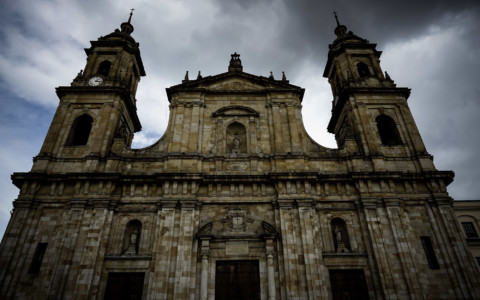