The Cemetery of the Nameless, Austria

A small forgotten cemetery filled with unknown souls rests peacefully just outside of Vienna, Austria. Known locally as the Friedhof der Namenlosen. This translates to the Cemetery of the Nameless. Though created out of respect for the dead, the cemetery has a grim past and is almost certainly haunted.

History of the Cemetery of the Nameless

Throughout the 1800s the Danube River, which cuts through Austria, was often littered with bodies. These were usually drowning victims, those who had committed suicide and often cause of death was unknown. Once the river had claimed these lives it would carry the lifeless bodies of its victims ashore. Hence, dumping them in the same area. As even more bodies accumulated, respectful locals sought out solutions to offer them peace.

The Cemetery of the Nameless was erected to offer these unidentified, ‘nameless’ people a place to rest. Because they could not be interred at any of the Catholic cemeteries in Vienna. Probably as many were victims of suicide. Bodies were routinely collected and interred at this cemetery, sporting markers listing them as nameless people.

Almost 500 people were interred at the original cemetery, which was eventually abandoned. Today, a more modern and smaller segment of the cemetery continues to stand. This burial plot holds the remains of 104 people. Of those buried in the cemetery, 61 remain nameless, whereas others were identified by family or friends.

Rows upon rows of black wrought iron crosses adorned with silver crucifixes create symmetry between the uniform burial plots. Though containing many unknown individuals, this cemetery is rather well maintained. Furthermore, many of the graves are even decorated with flowers, candles and sentimental ornaments.

Hauntings of the Cemetery of the Nameless

There are many stories that suggest that the Cemetery of the Nameless could be haunted. Consequently, it is commonly referred to as one of the most haunted places in Vienna.

Many people claim to have sighted apparitions and shadow figures throughout the Cemetery of the Nameless. There have even been reports of disembodied voices and cries coming from the small graveyard. As a result, it is thought that these could belong to the deceased at rest here. Maybe some of them are unhappy their memory has been lost to the world along with their name?

Furthermore, it is rumored that a former caretaker of the cemetery still remains in the area. Despite having since passed over. Many claim to have sighted this man walking through the cemetery late at night.

Finally, during an investigation, I conducted at the cemetery, I received ‘Konstantin’ over a ghost hunting device. This was most noteworthy since I asked any spirits present for their name. Could this be coincidental, or a spirit wanting to share who they were in life?

Visiting the Cemetery of the Nameless

The Cemetery of the Nameless is not an easily located place. Though, it is certainly worth a visit for its historical relevance. The cemetery itself is around a 40-minute drive from Vienna’s city center. If you have access to your own car this presents less of a problem. For me, it was a fairly expensive taxi ride. There is a bus which runs to and from the area. Pair this with a train and you can get to and from the cemetery easily.

The cemetery is marked on Google Maps and there are some small road signs signaling its whereabouts. It is tucked away amongst heavy industry, hidden directly behind two large grain silos. It will feel like you are not supposed to drive through that area, although it is fine.

Interested in other haunted cemeteries? I highly recommend checking out London’s Highgate Cemetery. 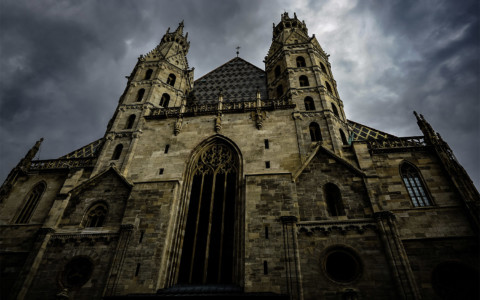