The Blue Bell Inn is a picture-perfect building located in Sorell, Tasmania. The bluestone building may appear cute, yet it has had some pretty terrible moments in its history that continue to linger over the inn.

The Blue Bell Inn is a heritage-listed building with a history that extends back to 1829. The original wooden building was unfortunately lost to fire 1863, yet the inn was re-built later, this time using stone. The inn has witnessed plenty within Sorell during its time and has remained an important location for the town, functioning as more than just accommodation over the years. The building has much significance to Sorell, even being utilized as an emergency makeshift hospital during WWI. In addition, the building has also functioned as an influenza and maternity hospital. Despite this history, the building is not said to be haunted by these moments in its past but by more mysterious events.

Ghosts of the Blue Bell Inn

The main ghost story associated with the haunted Blue Bell Inn is that of a lady named Ann. She is said to have died in 1840 within the Blue Bell Inn after falling down a flight of stairs.  At this time she was a live-in mistress for the current inn-keeper. Following Ann’s death, William Currie, the inn’s proprietor, was accused and charged with her murder. However, William was a powerful man and was later pardoned of this crime.

The details surrounding Ann’s death remain a mystery, yet are quite suspicious. She did die within the original wooden inn that was destroyed by fire, this was curiously a one-story building. It seems strange for her to sustain such terrible injuries causing her death by falling downstairs in a one-story building. There were also witnesses who stated Ann appeared to have been beaten days before her death.

Whatever the cause for Ann’s tragic death, her spirit is rumored to have remained to haunt the inn. Despite the original building being destroyed and rebuilt her spirit has clung to the land and the inn. She is quite active throughout the building, yet Room 4 seems to be especially interesting for the paranormal. Her spirit is believed to be good and is mostly known for moving around objects like curtains or glasses. The current owners claim to have had interactions with her spirit, including the husband receiving a cold kiss from Ann’s ghost one night while his wife was away.

The Blue Bell Inn is a cozy and historic bed and breakfast that should be visited by anyone passing through Sorell. It contains several rooms for accommodation and a large, elegant ballroom. The owners of this property are delightful and very open to sharing their experiences with Ann, as well as the inn’s history.

If you enjoyed this article you might also like to read about another haunted Tasmanian hotel, the Bush Inn. 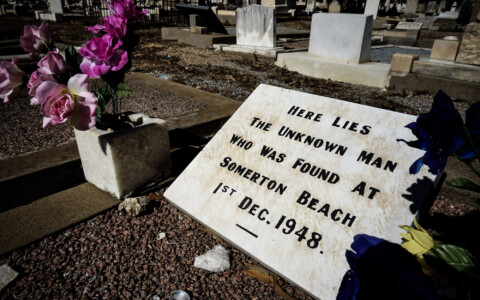 The Mystery and Death of the Somerton Man

It was here in 1948 that the body of an unidentifi

Investigate a haunted street with me! 👻 New vid

It’s beginning to look a lot like CRYPTmas! I ju