Although it appears foreboding, the Dakota Building is an iconic landmark that has become one of the most sought after private residences in New York City. The Dakota Apartments were constructed between 1880 and 1884. Having strikingly beautiful architecture and a prime Manhattan location, the building holds a prestigious position and has attracted many notable residents from musicians, actors, sports stars and countless other individuals who are not strangers to the spotlight.

Perhaps the most famous person to reside within the notorious Dakota is one of The Beatles! John Lennon lived within one of the Dakota’s apartments, along with Yoko Ono, before his untimely death.

On the 8th of December 1980 John Lennon was shot in an entry archway of the Dakota Building where he had been living. Lennon would die from these wounds, despite efforts to resuscitate him. Since his death, it is said that Lennon has joined the ranks of many other spirits who haunt the notorious New York City apartment complex.

Many people passing by the residence have claimed to spot John Lennon’s ghost standing in the entranceway to the building, the very place where he was shot and died. Those who have sighted him describe him as being surrounded by a bright, white light as if he is shrouded in a protective aura. More touchingly, Lennon has also been spotted within his former apartment. Here, his ghost has been seen calmly playing melodies on a piano.

Other Hauntings of the Dakota Building

The ghost of John Lennon is without a doubt the best-known spirit to haunt the Dakota Building, but he is definitely not alone in the building. A number of other ghosts are said to dwell within the apartment complex. One of the most frequently sighted spirits here is a woman seen walking the hallways, crying. It is said that this woman is Elise Vesley. She was the property manager of the Dakota from the ’30s to the ’50s. Elise suffered a tremendous amount of pain while at the Dakota after her young son was killed, being hit by a passing truck right outside of the Dakota. The strong emotional pain Elise endured here is thought to have imprinted on the building and caused her spirit to make an unfortunate attachment to its walls.

The Dakota Building is also haunted by a young girl. She has been described as having blonde hair and sporting a bright yellow dress while playing innocently with a red ball. Additionally, the spirit of Edward Cabot Clark has also been seen within the Dakota since his death. He is the man responsible for this magnificent structure’s construction. He is supposedly still looking over the residence and described as a strange-looking man wearing a wig.

Poltergeist activity in the basement of the Dakota is another commonly reported phenomena in the haunted building. Some say the spirit responsible for this behavior is Jo Mielziner. Interestingly, Jo did not die inside the building but was killed just outside of it, being hit by a car on the street. Another of the more sinister paranormal events to happen in the building centers on one of the elevators. This elevator had to endure continuous refurbishments as it was being relentlessly attacked by what appeared to be knife cuts, which would appear out of thin air. The spirit responsible for this property damage was so consistent, they earned two sinister nicknames. Often being referred to as ‘The Phantom of The Dakota’ or the ‘Mad Slasher.’ Just who was responsible for these strange attacks remains unknown to this day.

The Dakota Building is an iconic building to visit in New York and lies a short distance from one part of Central Park. Its interior can obviously not be accessed as it remains a private residence, but the exterior makes for some amazing photographs. You might even recognize its exterior as being used in some shots of the classic horror film, Rosemary’s Baby.

If you enjoyed this article, you may also like to read about another place haunted by the celebrity ghost of Marilyn Monroe. 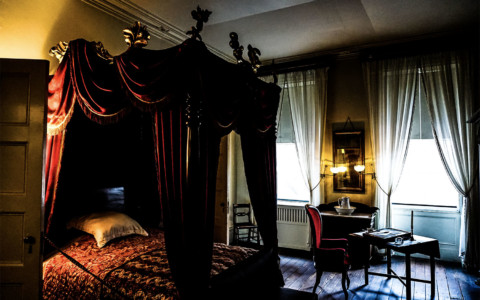