Along New Orlean’s vivid, loud and colorful Bourbon Street lies a rather unsuspecting establishment. Holding the title for being the oldest building to operate as a bar within the United States, Lafitte’s Blacksmith Shop certainly looks the part. Pieces of New Orlean’s past and some of it’s former residents souls are preserved in this historically listed 1700’s French Colonial building.

Now one of the oldest surviving structures within the French Quarter, Lafitte’s Blacksmith Shop is a well known NOLA destination. Formerly the site of infamous Jean Lafitte’s illicit privateer operation, today the location acts as a neighborhood bar.

Aptly names after a former occupant, Lafitte’s Blacksmith Shop continues to host residents no longer of this plane.

Famously known for being a pirate, privateer and a celebrated war hero, Jean Lafitte operated an illegal smuggling business from within the walls of the Blacksmith Shop. He died in 1823 after being fatally wounded in battle. Even death has not stopped Lafitte from paying visits to his old Blacksmith Shop. Staff and guests have sighted what they believe to be Lafitte’s ghost on numerous occasions. Usually, a full body apparition in period clothing is reported hanging around the fireplace. The figure tends to make eye contact before disappearing into thin air.

Lafitte’s Blacksmith Shop is also home to another spirit. This is the ghost of an unknown female thought to have ended her own life upstairs, although this story is not supported by evidence. This ghost is well known for approaching upstairs visitors and quietly whispering their name into their ears.

Finally and most terrifyingly Lafitte’s Blacksmith Shop has become home to an entity that has never been of this world. Ghost hauntings aside, this building is said to host a demonic presence. A pair of bright red eyes emanating from the darkest corners of the bar are the cause for suspicion of this demonic haunting. Eerily enough, these red eyes are commonly seen floating above the heads of bar staff.

To visit Lafitte’s Blacksmith Shop is to be transported back to a time when pirates ruled New Orleans underground. The exterior and interior for that matter feel like they haven’t been changed or updated since they were first constructed. Stone and brick make up much of the structure while ambience is achieved through lack of electricity. The entire interior is dimly lit solely by candle light, leaving plenty of shadows for entities to dwell in.

I stopped by Lafitte’s Blacksmith Shop a few times during my New Orleans visit. Once, just to grab a drink… a few drinks. I recommend trying the Hurricane, which like all NOLA drinks can be taken to go in a branded Lafitte’s plastic cup. Proceed with caution as this drink is deceivingly strong. I paid the bar a second visit while on a walking ghost tour. Numerous tours stop by Lafitte’s Blacksmith Shop and allow guests to enter and grab a refreshment for the road.

Thanks for reading. If you’re interested in visiting more unique haunted locations in the United States you might like my blog about the Queen Mary ghost ship. 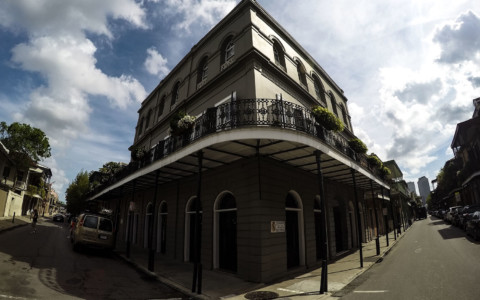