The Manila Film Center was supposed to be a place of wealth, glory and fame. Today, its abandoned structure is left to crumble and its foreboding presence casts an eerie atmosphere over Manila. Though the exterior of this building is intimidating, it is the stories of death and ghosts inhabiting the film center that have formed the truly chilling reputation this building possesses.

The Manila Film Center was built by a rich woman, Imelda Marcos. She envisioned the building to be one that would rival Cannes and all other major film festivals around the world. It had a budget of $25 million, which was excessive for its time, yet its deadlines were even more extravagant. No expense was spared to meet the impossibly tight deadline for the center’s completion of January 1982. Over 4000 people were hired to work around the clock towards the building’s completion.

This would all cumulate into cut corners and unsafe work practices until 3 am on the 17th of November 1981, when a terrible accident occurred. Many reports state that faulty scaffolding caused a number of people to fall from a great height to sustain major injuries and death. It is said that this event claimed the lives of 168 people. Legend has it that as the news of this shocking event reached Imelda, her focus immediately shifted to think of her tight deadline. Without consideration for the welfare of her workers or their families, she restricted access to the site for several critical hours following the tragedy. This meant many people weren’t able to gain access to health or rescue workers. Her next move was a sickening one, that has sealed the Manila Film Center’s infamy to this day. Imelda allegedly ordered to have the bodies of these dead workers covered over by an extra layer of cement, allowing construction to continue seamlessly around these entombed victims.

While many believe these claims are likely sensationalized, this event has become somewhat of a local legend that is widely known and spoken of. It seems there was likely an accident, yet the extent of the death and injury caused as a result of it may have been played up. Some sources state that only seven were killed in this event and each of their bodies was removed and given proper burials. Regardless of the truth, the Manila Film Center is a place that conjures spine chilling imagery for many Filipinos.

Ghosts of the Manila Film Center

The Manila Film Center holds the distinction of being one of the most haunted places in the Philippines. Undoubtedly, the tragedy of the Manila Film Center is largely responsible for this reputation. The souls of the people claimed to have died in this tragedy are said to have become trapped within the center, just as their bodies are trapped in their cement tombs.

Their many ghosts are said to wander the premises along with that of Betty Benitez. Betty was in charge of overseeing the construction efforts of the center at the time of the accident. She was also the person to take the initial orders of Imelda to entomb the dead workers and put them into practice. Betty died soon after these horrifying events played out under mysterious circumstances. While it is not known why Betty’s ghost would return to the Manila Film Center, some speculate it is her own grief and guilt that has drawn her back.

Since this awful moment in the film center’s history transpired, countless reports of agonized disembodied screams have been reported to emanate from the building. Many others have claimed to sight ghostly apparitions too. These are usually described as looking like workers and sometimes partially enveloped by the center’s concrete floor as if reliving their horrifying accident. There’s also the commonly held belief that the building is cursed and this tragic event tainted the building and led to its quick demise and financial ruin.

The Manila Film Center is permanently closed. The future of the building is currently uncertain, though works to restore the property are being undertaken. Security currently guards the building, which displays many safety signs warning visitors of the crumbling structure. The building can still be viewed and photographed from the exterior.

If you are interested in visiting haunted places in the Philippines, I highly recommend checking out the Old Diplomat Hotel in Baguio. 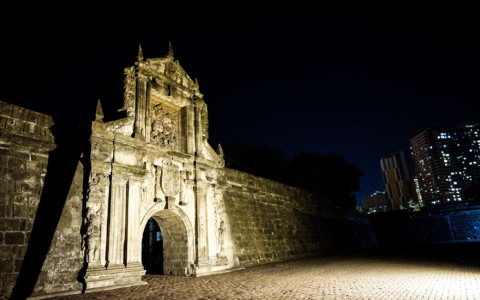