Mumbai is one of the most progressive and busy cities in India. It is a place of color and ancient tradition, laced in terror. There are some parts of the city, which have become notorious for ghostly activity. Here’s where you can find the most haunted places in Mumbai.

The first location on this list is a mysteriously abandoned housing community. The ruin consists of a set of tightly clustered houses that were destroyed years ago due to a devastating fire. Since this fire, the buildings have remained empty, yet some say that ghostly inhabitants have remained.

There is a level of mystery surrounding this area as no one truly knows its full history or what caused the fire. There are whispers amongst some of those local to the ruins that the place must be cursed. These are the same people to report paranormal occurrences at the site. Many have claimed to hear strange unnatural noises emanating from the ruin in the dead of night. They’ve also claimed to witness bizarre, unexplainable shadows and ghostly figures passing through the empty buildings when they should be empty.

This is a location that the team at Parapsychology and Investigations Research Society have investigated many times. They have found some interesting phenomena at the location with emf readings spiking, hearing disembodied voices and capturing strange anomalies on camera.

Our next haunted location in Mumbai is another that is cloaked in mystery. In one of the most prestigious areas of Mumbai lies the Jivesh Terraces apartment complex. This towering building exists on the beachfront and should be a sought after place to live, yet many in the city believe Jivesh Terraces to be cursed.

The rumors that this building is cursed largely stems from its construction being halted part way through for 5 long years. The reason behind this construction delay was that several construction workers died under mysterious circumstances while working on the building. Add to this other rumors that the apartment complex was built over an existing burial ground, you have the perfect storm for a curse.

If you thought that the Jivesh Terraces couldn’t get any creepier, you’d be wrong. Many also claim this location to be haunted. Residents have claimed to encounter spirits within the building, some of which are believed to be former residents. However, other spirits could also be leftover from the burial ground it is supposedly built over, as well as the construction workers that sadly died while building the tower.

Mukesh Mills is perhaps the best known haunted location in Mumbai. It has been given plenty of coverage having featured in popular Bollywood films and commercials. The shoots in these locations are largely responsible for the terrifying ghost stories that have been circulated about the old mill.

The origins of this haunted location in Mumbai date back to the 1870s when it was first built. The Mukesh cotton Mills went on to become a thriving and profitable business in the Colaba district. It was so bustling it contained its own dock where boats could deliver and take goods. Eventually, this business was to face adversity, leading to its complete closure. Shortly after Mukesh Mills was shut down and abandoned it was set ablaze and largely destroyed by a fire. Since the mills closure, many stories have been circulated about its dark side.

Many of the film crews that have worked within Mukesh Mills have refused to work on-site after nightfall. They are scared of this location after many have reported strange encounters with the paranormal. A number of actors have reported to forget lines in the mills, become disoriented and lost and even have the unshakeable feeling of being watched. However, it is the terrifying reports of possession which has caused many to refuse to work at the mills altogether.

The most disturbing story tells of a young female crew member being taken over by someone or something rather dark. Supposedly as the other members of her crew were attempting to help her, this young woman became agitated and somewhat aggressive. They reported her voice completely changing, becoming much deeper and hoarse as if a man was speaking through her. Supposedly she began to yell at them to leave Mukesh Mills, which is truly disturbing.

2. The Tower of Silence

The next location on this list is perhaps the most interesting and unique. It is known as the Tower of Silence. This place of death ritual is of importance to the Parsis community in Mumbai. These are a group of people who migrated to India from Persia and remain prevalent in the city today.

The Tower of Silence consists of a large raised platform. This is where the Parisis community brings their dead relatives. The bodies of the deceased are laid out during a ceremony at the top of the tower. The bodies are then left to the elements, which includes vultures native to the area. This ceremony remains important to the Parsis community and is believed to ward off evil and demons following a death in their community.

For obvious reasons, especially the links to death that the Tower of Silence has, it is considered by many to be one of the most haunted places in Mumbai as well as India. However, this could be directly related to the fear and misunderstanding surrounding the death rituals of the Parsis community.

The top spot on this list has been reserved for one of the grandest places in Mumbai, the Taj Mahal Palace Hotel. This stunning building was opened in 1903 and has been a place where many A-list guests, including world leaders and celebrities, have laid their heads over the years. The space was repurposed as a hospital during WWII and faced a horrible terrorist attack in 2008, which resulted in a number of deaths.

Despite having such a traumatic past, the hotel is not haunted by these dark events. To understand the Taj Mahal Palace Hotel’s ghost we need to further examine its construction. At this time, W.A. Chambers was assigned as the head architect. It is told that he had approved a number of blueprints for the project before heading out on a short trip to the UK. Upon his return, he realized that he had approved a devastating mistake in the construction of the hotel. It is said the hotel was built facing the wrong direction. This is said to have weighed heavily on Chambers, who was a known perfectionist. It was also the main reason said to have driven him to suicide. Chambers took his own life by jumping from the 5th floor of the Taj Mahal Palace Hotel.

Since his death, Chambers has remained in ghost-form at the hotel. Many have sighted him within the hallways of the building. He is also said to look out for the hotel. Famously known for knocking out an employee who was attempting to steal valuable silverware. 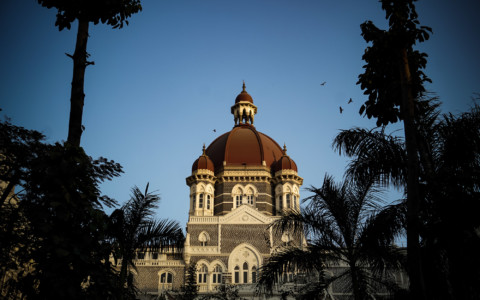