Wales’ oldest inn rests in a peaceful little country town, surrounded by green pastures and framed by the looming Skirrid Mountain. At first glance the inn looks quaint and proper. Patrons fill the indoor and outdoor seating areas, enjoying their lunch and having a few drinks. The Skirrid Inn has a much darker side that becomes apparent after looking closely inside the pub.

The staircase leading up to the upper floors and the inn’s rooms for rent is decorated by a noose, symbolic of the many executions carried out within the building. During the earlier days of the inn’s 900 year existence, the upper floors of the building were actually used as a courthouse. Two of the upstairs bedroom are converted from what was once the courthouse. Many people were tried, jailed and executed on the property. It is rumored that around 180 hangings took place on the Skirrid Mountain Inn’s staircase. The inn has even managed to retain its original hanging beam, now on display to the public and proudly wearing the grooves that the hanging rope has worn into its wood. In addition the old prisoner holding cell still exists today as a storage cupboard.

Such an old building with close ties to death usually develop spooky folklore and tales of ghosts. The Skirrid Inn is no exception to this and is commonly considered to be one of the most haunted places in Wales.

Not surprisingly, the Skirrid Inn has many ghost stories associated with it. One of the most famed hauntings is that of a supposed former judge that worked at the Skirrid, Judge John Jeffries. His entity is said to haunt the upper levels of the Skirrid Inn and is described as quite a nasty ghosts. Many people believe his spirit has remained within the property to seek out more death, forever looking for his next hanging victim.

Another entity, thought to be even more evil than Judge John Jefferies is that of a former hangman. This spirit also hangs (pun intended) around on the upper floors of the inn, especially on the staircase where so many hangings were performed. His malevolent apparition has been seen by many and is usually described as a tall, foreboding, black, shadow-like mass.

Yet another ghost said to dwell in the staircase area is that of an executed man named John Crowther. John was hanged for his crime of stealing sheep. He was actually the last man hanged in Wales for this type of crime. Since his death his specter has been spotted inside the Skirrid Inn and it is presumed to still occupy the space, as he is disgruntled at the outcome of his court case.

Other well known ghosts to haunt the Skirrid Inn are Father Henry Vaughn and Fanny Price. Henry is said to roam the downstairs pub area, looking out for the building and its inhabitants. Fanny is said to haunt the upstairs bedrooms at the inn (primarily Rooms 2 and 3). She is known to have worked at the inn and died there of consumption sometime in the 18th century. Since her death she has been seen, heard and even smelt all throughout the Skirrid Inn.

Countless more paranormal claims have come out of the Skirrid Inn during its long existence. Poltergeist activity has caused glasses to be thrown across the room, disembodied footsteps and whispers are common. Many have also reported to be overcome with dizziness when ascending the staircase and most frighteningly to feel as though they are being choked before developing rope burn on their necks.

The Skirrid Inn is a charming place to visit, filled with a somewhat dark, yet interesting history. It is open each day as a typical pub for lunch, dinner and drinks. Rooms are available for overnight stays – The inn has three bedrooms to choose from. Ghost tours and hunts are also organized occasionally by external companies.

If you enjoyed this read and are looking for more information on the Skirrid Inn, check out my paranormal investigation of the location. If you’d like to learn about other haunted places in Wales, I recommend checking out Margam Castle. 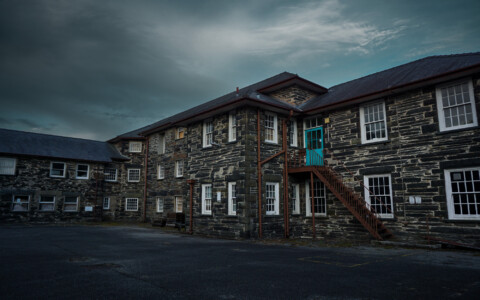