The Galleries of Justice

Originally called the Shire Hall and County Gaol, the Galleries of Justice (now named the National Justice Museum) has sat in place for hundreds of years. The first documented use of this site as a court of law dates back to 1375, when Edward III was in rule. This historic location also contains a prison dating to the 1400s and a cave system, which is likely much older than the site’s first documented use and was used as a type of prison-dungeon, even containing an oubliette.

It was the only place in the United Kingdom where one could be arrested, trialed, imprisoned and then, under some circumstances even executed, all under the one roof. For a time during the mid 1800s, the Galleries did house gallows where many were hanged for their crimes. These criminals remain on site today, being buried underneath the courtyard area.

Haunting of the Galleries of Justice

Throughout the years, the Galleries of Justice have accumulated a number of ghost stories, with many to visit having paranormal experiences. While a number of spirits are rumored to linger, only one of these is named. William Saville is said to haunt the entire space after being executed there for killing his wife who he wanted to leave for a younger woman. He is said to follow people, creating an unwelcome atmosphere and is typically accompanied with a rather unpleasant smell.

One place that seems to be particularly active is the Victorian courtroom. A place that has remained dignified in appearance, yet still exudes an intimidating atmosphere. Here, many have heard noises such as voices, footsteps, and even loud bangs, as if a judge is still passing verdict. Many others have also claimed to sight figures, faces and what appears to be ghostly people up on the gallery when no one is around.

The prison, dating to the 1400s, is also said to be quite active, as well as the exercise yard where many of the bodies of those executed lie. It is not uncommon to hear strange noises or sight shadow people there. Some have also claimed the women’s prison and laundry area are quite active too, with the presence of mischievous children remaining in the space.

Finally, the cave system, which was used primarily as a dungeon, seems to be one of the more active spaces. Some claim there to be a dark force in one area of the caves. Many to enter here have sighted anomalies, claimed to be touched by the unseen, heard distressing and unnatural noises and felt an eerie atmosphere.

Visiting the Haunted Galleries of Justice

The Galleries of Justice today remains open as the National Justice Museum in Nottingham England. It is an interesting and educational place to visit and tours during the day are available. From time to time, paranormal events are run within the space, or the museum can be rented out privately by paranormal groups. This is one place I would highly recommend for any paranormal investigator!

If you enjoyed learning about this haunted place, you might also find interest in the haunted Shrewsbury Prison. 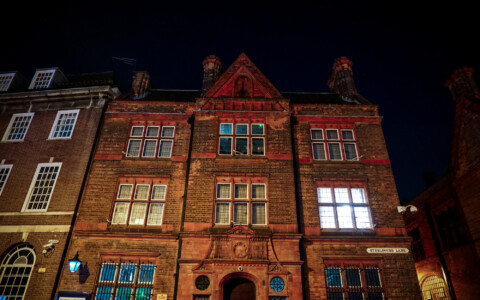